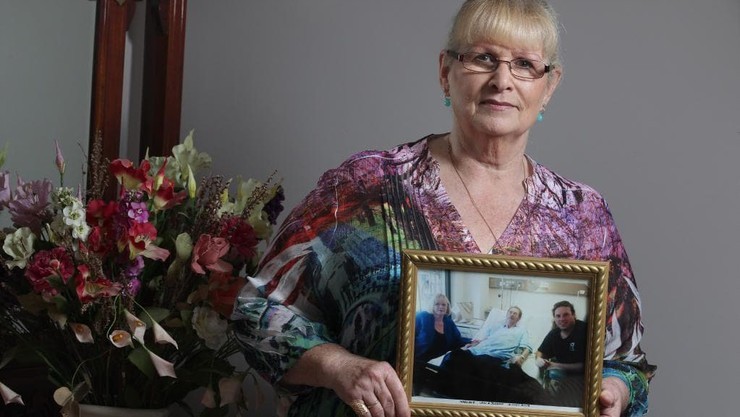 TOO LATE: Marcella van Soest with a photo of her husband Willem being treated in hospital for mesothelioma and inset, Willem in his youth. Picture: ROSS SWANBOROUGH. Image from the Advertiser.

On 17 June 2013 Judge Parsons of the District Court of South Australia handed down judgment finding BHP liable in negligence to Mr van Soest in relation to his condition of mesothelioma.

Mr van Soest worked as a painter and docker at the BHP Whyalla Shipyard for a period of 12 weeks in 1962.

During this employment Mr van Soest was required to work around laggers installing asbestos insulation around pipes and boilers in the engine room of the PJ Adams, a ship being fitted at the fitting out wharf.

Mr van Soest was also required to help the laggers on occasions with their work and to clean up after the laggers, sweeping up asbestos dust.

Years later, in 2011, Mr van Soest was diagnosed with mesothelioma. He brought proceedings in the District Court of South Australia against BHP.

BHP aggressively defended the claim, putting all matters in issue. In her Judgment Judge Parsons found that in 1962 BHP knew that the process of installing asbestos insulation on its ships carried with it a risk of contracting asbestosis.

She also found that BHP should have taken measures to limit exposure to asbestos dust including providing their workforce with respirators and vacuum cleaners to clean up the dust.

Judge Parsons also found that Mr van Soest's exposure to asbestos had made a material contribution to the development of his condition of mesothelioma.

This sum included an award of $20,000 for exemplary damages.

The award is the second award of exemplary damages to be made against BHP under the Dust Diseases Act.

BHP have appealed the Judgment to the Full Court of the Supreme Court of South Australia.